Warning: "continue" targeting switch is equivalent to "break". Did you mean to use "continue 2"? in /home/bluerave/domains/blueraven.pl/public_html/wp-content/plugins/qtranslate-x/qtranslate_frontend.php on line 497
 Pretzel buns – Cook with Blue Raven

It was a good day for the father Paolo. Children, who for weeks were taught new prayers, finally remembered the order of the Latin words and sounded in unison. Although the responsibilities with bread caused his tonsure shine with sweat, the number of loaves to oven seemed to increase rather than decrease, but even so, it was a good day.

In anticipation of the next portion of the golden loaves, father Paolo formed, from a dough, long strip and, whitout thinking or planning, it was formed in the shape of hands raised in prayer.

Satisfied with the effect, he created a few more rolls, baked it and gave to his students. In their honor he also named his baking “pretiolo” – “little reward”.

That is what legend says.

History of the pretzels (and stories about them) you can read all night. I think no other bread has so many studies.

This is simple bread – flour, yeast, water, without the addition of eggs and dairy products. It was established for the purpose of the Lent when all animal products are prohibited.

Usually formed in the shape of the arms crossing the chest (as initially was form of prayer), today we associate more with elaborately tied knots. Pretzels were worn with straps on the chest, hung on long sticks and small pretzels linked to ribbons as necklaces.

In Germany, pretzel became a symbol of bakers guild.

Characteristic shiny skin pretzels owe the Maillard reaction. Who wants to know more can read about this, but I will not bother you details – heat cause chemical reactions between amino acids and reducing sugars. Sounds very seriously and scientifically, but for the kitchen is enough to say that … we have a beautiful brown skin.

I did buns. Pretzel buns on a cold November. Join the other rolls in action “on sourdough-and-yeast,” which organizes this month blog: Grahamka, weka i kajzerka. And as a reminder of the July struggle Formula 1 track in Hockenheim. Two in one.

A bit like bread rolls, which we cook and bake. 🙂 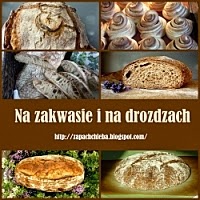 Pride of the photographer ;)